​Manuel Antonio National Park is 1.950 hectares of land of lush tropical forest and home to approximately 352 species of birds, 109 species of mammals, varied marine fauna and 346 species of vegetables.  Despite its small size and great popularity, Manuel Antonio has managed to remain one of the premiere nature spots in the country and is one of the most beautiful parks in the country as well as most popular, with locals and foreigners alike.  The rain forest and mountains literally meet the sea here and the ecosystem is teeming with land, sea and air species. If there is one place to visit in this country and be assured of seeing animals in the wild, this is it.   Just a couple of hours walking the park’s trails you can see the titi monkey (emblem species), the white-faced monkey, the howler monkey, the 2 and 3-toed sloth, the raccoon, coatis, birds such as the toucan and many other species. The squirrel monkey stands out, which is endemic to the national park with only 1,500 in the world. The park also includes 12 islands that provide refuge for various species of seabirds, an 18-hectare lagoon and mangroves, and excellent white-gray sand beaches such as Espadilla Sur, Manuel Antonio, Gemelas, and Puerto Escondido.
The area offers a plethora of activities – walking the park’s easy trails, white-water rafting, ocean cruising, zip lines, ocean and mangrove kayaking, sunset cruises and big-game fishing, to name but a few – this is one of the lushest places in Costa Rica, with spectacular  fringed by thickly forested hills home to; squirrel, white-faced, and howler monkeys, three-toed sloths, and other wildlife.

Quepos is well known by sport fishing enthusiasts. The blue waters off this coast provide exceptional challenge and excitement for seasoned, as well as occasional, anglers. International bill fishing tournaments held here routinely tie and break world records. Manuel Antonio . The hilly evergreen forest provides natural shade from the tropical sun and lines two gorgeous white sand beaches sloping to the gentle surf. Several trails lead through dense jungle growth to hidden sandy coves and magnificent lookouts over the ocean and beaches.
The road between Quepos & Manuel Antonio National Park has dozens of hotels and restaurants offering visitors a wide variety of accommodations and dining choices.
Near Manuel Antonio is Jardin Gaia which several years ago was named Costa Rica’s first official Wildlife Rescue Center.  The Center receives injured and confiscated animals and attempts to rehabilitate them for an eventual return to the wild. 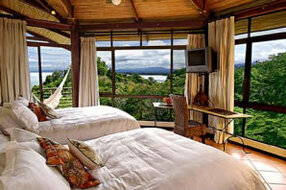